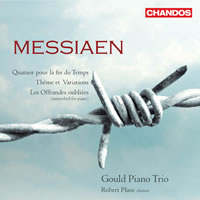 ‘.. a fine quartet.., the Gould Trio and Robert Plane are among the best modern accounts.’
BBC Music Magazine August 2008

‘The Gould Trio focuses on the music’s fantastical side, so much so that the piece has rarely seemed more mercurial and cogent.’
Philadelphia Inquirer, USA

‘The premiere of Messiaen’s Quartet for the End of Time may have been wildly over-mythologised, but it’s still an amazing story. Its performance here is exemplary.’
Album of the Week, The Independent

‘In his long solo Robert Plane plays with astonishing control and eloquence. His extreme pianissimos, for example, will have other clarinetists gasping in admiration.’
Classical.Net