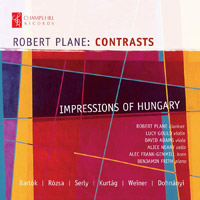 Clarinettist Robert Plane was inspired to record this all-Hungarian programme by the discovery of a previously unheard 1949 trio by Tibor Serly called Chamber Folk Music. That title could apply to most of what’s here: the piquant harmonies and itchy rhythms of Hungarian folk music are never far away, and the performances are poised and idiomatic. It opens with Bartók’s Contrasts, written for Benny Goodman, and closes with the Brahmsian sweep of Ernő Dohnányi’s Sextet, taking in works by Rózsa, Kurtág and Weiner on the way. Serly settled in New York aged 10 but returned to Hungary to study, and his trio reflects this: Gershwinesque episodes, first languid and then gently perky, frame a lament for clarinet and violin that looks longingly towards Budapest. It’s a little gem, and the light touch adopted by Plane together with violinist Lucy Gould and pianist Benjamin Frith is ideal.
The Guardian September 2017

Robert Plane is always inquiring as to repertoire and his new disc surveys almost six decades of Hungarian music, beginning with Contrasts (1938), which Bartók wrote for Benny Goodman, Joseph Szigeti and himself with the length of 12-inch 78rpm discs in mind. Incisive…, this version is at its best in the central ‘Relaxation’ with its night-music overtones. Plane’s musicianship is abetted throughout by that of his colleagues, the whole well served by lucid recorded sound and an insightful booklet note from Daniel Jaffé. Collecting such a programme by other means would not be easy; better simply to acquire this disc and enjoy.
Gramophone October 2017