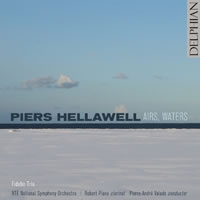 ‘Most impressive, however, is Agricolas, its two movements comprising six main sections connected by bridge passages analogous to the objects and supports found in sculpture, and whose Epilogue is a synthesis of affecting pose. The performances do the music proud, not least the….soulful clarinet playing of Robert Plane….’
Gramophone

‘The impressive range of Piers Hellawell’s work is displayed on this collection of six compositions, five of which are premiere recordings. The orchestral piece Degrees of Separation is a fascinating study of initial momentum dissolving into musical entropy, while the piano solo Basho is named not for the poet but the sumo contest, reflected in its 15 brief tussles between major and minor. Another piano piece, Airs, Waters and Floating Islands, shifts between bluesy runs and more reflective passages; blues echoes are also discernible in Agricolas, featuring clarinet and orchestra in a succession of whirligig encounters whose inquisitive, expectant figures are stained with urban mystery: a large-scale palette applied with the most delicate of brushwork.’
The Independent

‘These six diverse pieces reveal the vividness of Hellawell’s ideas, the deftness of their execution, and his effective use of abrupt contrasts. Agricolas (2008) is a hugely attractive clarinet concerto, a mosaic of encounters subtly united by a harmonic ground. Robert Plane plays the solo part with a flair matched by Pierre-Andre Valade’s forces.’
The Sunday Times

‘From the Messiaen-like ecstasy Agricolas for clarinet and orchestra – a gorgeously impassioned work played by Robert Plane and the RTE National Symphony Orchestra – to the suspended images of Airs, Waters and Floating Islands for solo piano (Mary Dullea), and the quirky transparency of Etruscan Games for piano trio, this compendium of music by Ulster-based Piers Hellawell is a rich kaleidoscope of inspired creativity. Music well worth getting to know.’
The Scotsman