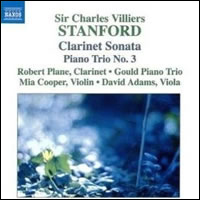 ‘There is much to admire in these four chamber works for clarinet, described by the composer as being written in a ‘Brahmsian’ idiom. British clarinettist Robert Plane plays their mellifluous themes with grace and affection.’
Classic FM magazine 2007

‘Spooky, no sooner had I dug out Thea King’s affectionate 1980 Hyperion recording of the Stanford Sonata following the sad announcement of her death in June than Robert Plane’s new version dropped on the doormat. The work is one of Stanford’s strongest achievements from his later years, boasting at its heart a powerful Adagio (”caoine – an Irish lament) which finds Plane even more responsive to the music’s raw emotion and beaming fantasy than either King or Emma Johnson. Ravishing in tone and exploiting an excitingly wide dynamic range, Plane forges a commandingly articulate alliance with pianist Benjamin Frith. Indeed, it’s hard to imagine more sympathetic music-making – a statement which holds true for the Three Intermezzi (an exceedingly attractive trilogy dating from 1879) and the two substantial, utterly, disarming Fantasies for clarinet and string quartet…Naxos’s absurdly modest asking-price is the icing on the cake!’
Gramophone November 2007

‘Plane’s clarinet has an eloquent and expressive voice. He can be clownish, rude, barracking and sneering; he can weep, simper and smarm; he can joke, cackle and cheer. He can also produce whispered tone from nothing, bite the air with a chisel edge, roar low down like a didgeridoo or soar with the pure white sound of a cathedral treble. He can do all this among chords recognisable from Stanford’s church music.’
The Times August 2007