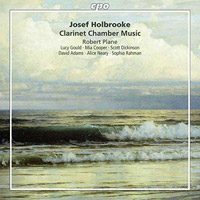 ‘Joseph Holbrooke (1878-1958) became known as “the cockney Wagner” after the success of his operatic trilogy The Cauldron of Annwn, based on stories from the Mabinogion. But as this collection of his chamber works with clarinet – immaculately performed by Robert Plane and colleagues – shows, the main influence on his fundamentally late-romantic style was Brahms rather than Wagner.’
Guardian February 2015

“…More English Pastoral than Brahms…..an enjoyable way to revisit the chamber music of a composer from Croydon who fell from favour.’”
BBC Radio 3 CD Review