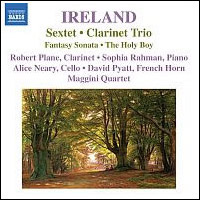 ‘This disc is a most welcome addition to the catalogue of recordings of John Ireland’s chamber music (a rather neglected but superb corpus of deeply felt works) in that its principal focus is the range of pieces that the composer wrote for clarinet, played here with ravishing lyricism and conviction by Robert Plane, who has surely now fully occupied the shoes of the late Thea King in his championship of British clarinet music. Plane’s kinship with this music is clear from the more Brahmsian hues of the Sextet (1898), the limpid lyricism of The Holy Boy arrangement (1913), to the extrovert passion of the Fantasy Sonata for Clarinet (1943) where he is arguably at his most impressive.

Though the Sextet, a student work, betrays a deference to Brahms (not surprising since Stanford, his teacher prescribed the model for all his students), there is a freshness and fluency about the material as well as a flair for the idiom, which compares favourably with those prodigious chamber works of Hurlstone, Coleridge-Taylor (both RCM fellow students) and, later, Frank Bridge. An attractive novelty on this CD is the Clarinet Trio which Ireland completed in 1913 but withdrew after two performances. Left incomplete and in manuscript at Ireland’s death, it has been reconstructed skilfully by Stephen fox (using analogies with a later version for piano trio and a further reworking of the material for his Piano Trio No 3 of 1938). Plane, Alice Neary and Sophia Rahman give a sensitive reading of a style that is much more distinctly “Irelandesque” in its assimilation of French sonorities and sound-moments, Plane’s hushed playing being especially enthralling.’
Gramophone June 2009

‘The Fantasy Sonata is one of his most impressive and personal works and a worthy successor to the two Brahms Clarinet Sonatas. Robert Plane and Sophia Rahman give it a livlier, less innately nostalgic performance than some of their distinguished rivals, discovering melancholic defiance beneath its lyrical and playful exterior…A valuable, intriguing disc.’
BBC Music Magazine May 2009

‘John Ireland composed the Sextet for clarinet, French horn and string quartet in 1898, but felt insecure in his student days that hid it away. It was sixty-two years later before this magnificent and passionate score was to come to light. With the equally unknown and vibrant Clarinet Trio, they form part of one of the most engaging discs of British chamber music I have heard. Robert Plane and David Pyatt are the superb clarinet and horn, and together with the fabulous Maggini Quartet guarantee high quality performances.’
Yorkshire Post

‘This is another winning entry in Naxos’s ongoing commitment to the music of John Ireland. Performances are ideal and recording, as always with this label, excellent. Strongly recommended.’
Fanfare, July 2009

‘Robert Plane, along with several prominent colleagues in the British music scene, presents this program. Ireland’s admiration of Brahms and Debussy is evident; his music is more sincere than showy, more expressive than hurried. Plane and his collaborators respect these boundaries, yet still make an excellent case for his works, knowing when to hold back and when to indulge the composer’s irresistible romanticism. Plane is more disciplined than most British clarinetists when it comes to sound and articulation—he is a very good chamber musician, and his soft playing is deliciously exquisite.’
American Record Guide July 2009