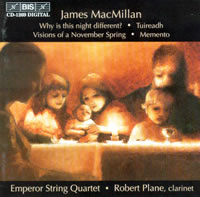 James MacMillan
– Tuireadh
– plus other works

“The loneliness one dare not sound”: Emily Dickinson’s frightened image could well serve as the motto for James MacMillan’s Tuireadh (Gaelic for lament) where Robert Plane’s gull-like clarinet swoops or hovers around the anguished Emperor String Quartet in remembrance of the ill-fated North Sea oil-rig Piper Alpha. Some have spoken of the work’s “keening”, its sighing and sobbing. But the overriding impression for me is of solitary witness: the scrub of bows on gut like wave-slapped wreckage, or a winged clarinet fighting off jagged string chords. Every now and again MacMillan cues an ethereal chorale. A moment of respite or the crooked finger of a summoning god?….. a remarkable programme that’s beautifully played and superbly recorded.’
The Independent

‘I can report that performances throughout are as superlatively disciplined as they are tirelessly eloquent; sound, balance and presentation are all beyond reproach.  Another MacMillan/BIS triumph.’
Gramophone Aug 2002